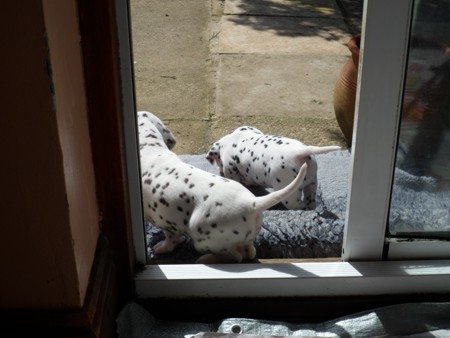 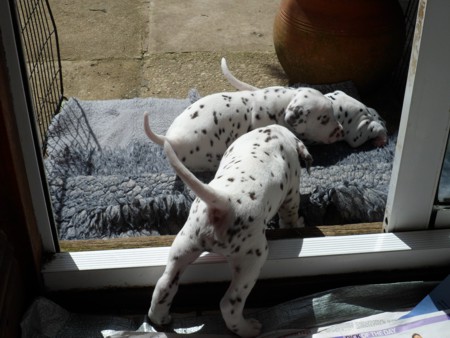 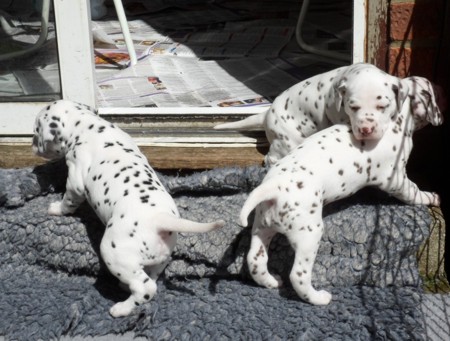 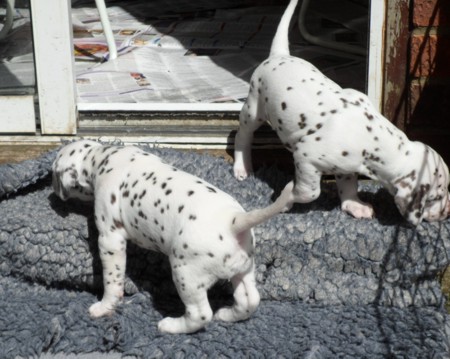 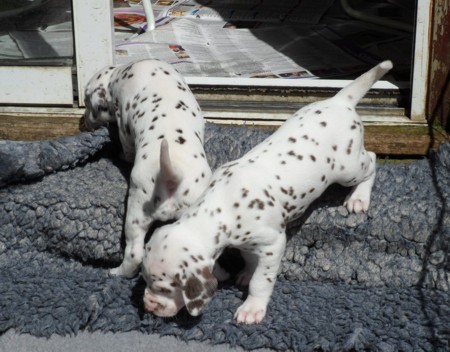 As you can see, they coped very well with their first outing.

There is a different background to the pictures of the Y-litter which Mary has taken lately. The pups have emerged from the whelping room into the “puppy” room.

There are still barriers between the litter and the other dogs in the house because Zaffre still doesn’t want the others too close – still a sotto voce growl when anyone looks too intently into the puppy room. 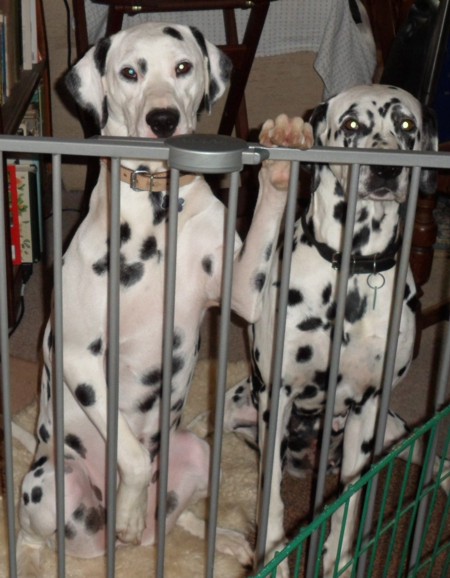 Soon we will be taking individual pictures and everyone will have their own page.

The first two weeks of the puppies’ lives is dramatic. They are born with eyes and ears firmly shut and without spots – they look like little white rats. However, they are mobile. They searched immediately for the milk bar and found it without any help.

They fit in your hand, and this litter’s average weight was 12 oz. Now they cover two hands and on average weigh 48 oz.

At ten days their eyes started to open and the spotting became visible on their coats.

Now they are up on their legs, and even more mobile. Some have tried to climb over Zaffre, if they were on the wrong side, when they have wanted a drink of milk. The front of the whelping box has been raised just in case. (We can’t have them getting lost in the whelping room, can we?)

This is only a short tale of what has happened in the last two weeks. More stories will come as they continue to grow and are moved into public view.

They have finally arrived, and the five boys and one girl are no fools. 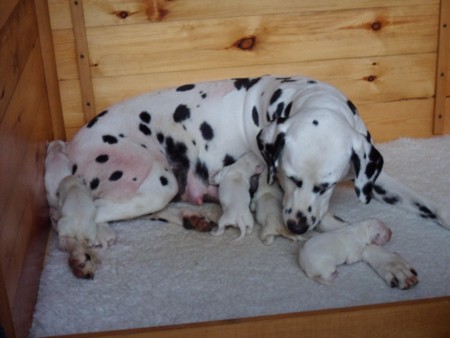 It took the whole night with the assistance of the vet at 4 this morning. Mary and I were busy helping swing puppies about in order to help them start their lives. It was also a very fraught time, as it took quite a while for a few of the pups to come around.

Zaffre still remains a little dopey as she begins her new role in the house. She keeps looking at these little white rats as they speed about the vet bed with some bewilderment. Now the “proud Mum” of a reasonable size litter, she is quickly adapting to the role. This family just appeared “while she was sleeping” but she is happily tending to them, although still as I type in a half-asleep state. However, she is getting back to her normal self. 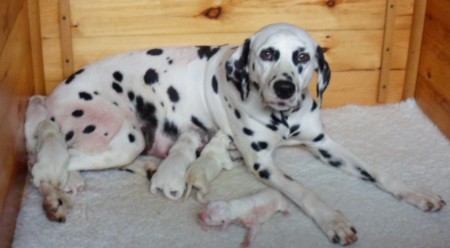 The house is now filled with what DV thinks are very strange sounds which have been constant since everyone came home from the vet. DV will all of a sudden bark because of the squeeking of the pups in the whelping room. Soon everyone will take a nap – including the humans in the house and there will descend the usual calm quiet here – at least for a little while.

Those naps won’t last too long; Mary and I will have to catch up on two days of things. Yesterday and the day before were spent in awaiting the birth, so no chores except the necessary were accomplished. The back yard has been tidied up almost completely, just a few more things for me to do. Mary has kept up all the day-to-day tasks. Now the “hard work” of puppies will begin.

More later on throughout the next eight weeks with the Y-litter. 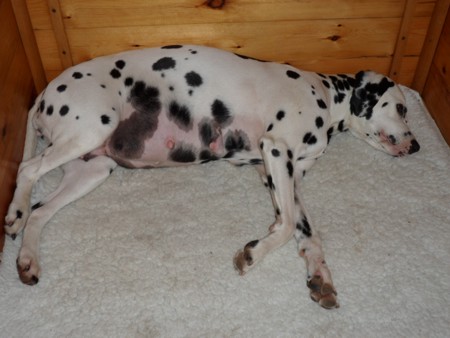 Zaffre was mated nine weeks ago. She is blooming – rather rotund – and she has slowed down quite a bit. Mary is not sure whether this is because of the heat we have lately or the fact that she is so porky. 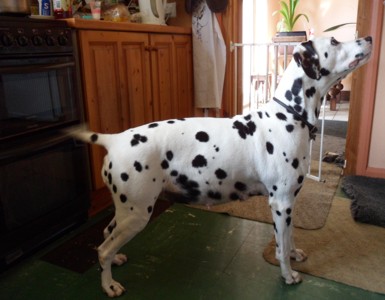 We intend to keep up to date via these pages. So if you are interested please sign up for the RSS feed or just drop by regularly.

Today is the final of Crufts, the dalmatian did not make it through the group stages, so some of our enthusiasm for the show has abated. YouTube has video of the show, so go over there to see more. We were very interested to see the group winners on the television (on More4). There are lots of things to see and then to discuss later. That is what we will probably be doing for the next few weeks.

However, on Thursday 200 dalmatians descended on the ring from all parts of the world to be judged and seen by so many by the ringside, again people came from all over the world to watch the judging, even at the dalmatian ring.

Marcy and Molly, Liesel and Lou were at the show, so we had a good time watching the judging, talking with each other and also with friends made at other shows.

We were also delighted to see Helen Smith (owner of Bella) and Jonathan and Helen Williams (owners of Tia) at the ringside. They disappeared at one point to do some important shopping, bits and pieces for the dogs. (What better place for that shopping than Crufts!)

However, we continue to attend shows to learn more about the breed, make friends and enjoy a day out with people from around the world who also have an interest in dalmatians as we do.

There will be more coming to the individual pages of the site, and I will link them here, when I have prepared them.

Mary and I visited Lacie and Willow yesterday. There will be more about that here with links later.

New year’s day found us up bright and early without any traces of overindulgence. (We began the year as we mean to go on!)

Mary had a peaceful and rest-full holiday period, as I walked the dogs from Christmass to Epiphany. She did get out but she did not have to have a dog in hand. Well, all except new year’s day, when the Tolutim girls all went out together. We walked in the glebe land fields behind the church.

Walked may be the wrong word to describe what was going on around us. Perpetua mobile would be a better description. The walk to the fields was pretty good, everyone was contained – no one was pulling excessively. When the gate closed behind us, everyone was ready to be off. Once we got the leads off and said, “Go for a run,” they did not stop running. Everyone ran – except for Mary and me, we progressed in a stately manner for the whole walk.

They really did enjoy running together. Well not so much together, for they did not form a hunting pack, but they did run with each other generally.

Sorrel at over eleven years kept up a fast trot for the whole walk, interested in all the smells round about. She did not run full-pelt with DV.

Casia ran. She ran here and there finding all the organic matter fit to find, tasting some, scoffing others. She quickly became the dirtiest of the dogs. She only stopped running when she stopped at the organic matter.

Zaffre ran as well, keeping up with Casia, though she did not stop every time Casia stopped. She also did not range as far as Casia, so she sped around us.

DV ran like a demon. She was one of the reasons Casia got so dirty, for she tried to play a great deal when Casia was near by. DV did not range as far as Casia nor Zaffre, but she did go beyond the range Sorrel kept. She did try to play with the others, but she was ignored.

Well, all except for one time. DV was running as pups do and we were keeping a weather eye out for the tornado streaking by (because we know the steering and brakes on this new model need to be run in). We avoided collisions, but Zaffre was not so lucky. I suppose it has to do with doing too much sniffing at the expense of watching. Zaffre had her head down; we avoided the Monster zipping by at full tilt, but Zaffre ten yards away was not lucky this time. DV collided fully with Zaffre. Both went tumbling. Both immediately were up and running about.

We thought Zaffre’s nose was a little out of joint for a bit, for she was not quite up to full speed for a moment. However DV was quickly away at a terrorising rate.

(A note of caution – although we were amused by this incident, our hearts did rise into our throats because we heard of a dog who had done the same thing, but in that case there was a broken neck. So we do take care when letting the dogs run free.)

It was a great walk. We look forward to more.

We wish you all happy holidays. It has been a quiet day in Slimbridge. Apart from church this morning, we have been enjoying a relaxing time after our dinner by watching the all-important Ratatouille and the The Gruffallo’s Child. Important intellectual endeavours as everyone will acknowledge. They will be followed by Dr Who and Downton Abbey and then bed.

The dogs have had a day off from the rigours of exercise for the day. After all we have been to full of Christmass turkey to be able to move.

Boxing Day promises a good walk for all. Not everyone together, but two walks of two.

What have you been up to for Christmass?

With all of our best wishes,

a little something from Mary

I wonder how many of you have different names for your dogs, not just their normal pet name, but other ones for different occasions?

Tolutim Eau de Vie has been called many things in the course of her short life, and has different names for different times. She is called “DV”, but she has a number of other names.

She has been “monster” for quite some time now. You might understand she is called this whenever she is being particularly naughty, a streak which all dalmatians have.

Recently, however, two new names have been attathced to her – “bouncing bomb” or “tigger”. She has very springy back legs that nearly take her over the child gates, especially whenever anyone calls. In fact she still jumps up on us far too much – we hope one day she will get the message.

It was going to happen some time. The bouncing bomb leapt up onto the rockery, and kept on bouncing in her excitement into the pond.

There was a plus to this, while she was so busy drying herself off, she didn’t hear me starting up the lawn mower and for the first time she stayed outside while I mowed the grass.