Pebbles was released from her struggle in the end with her failing health at the age of almost 14 years.

DV had to be put to sleep because of gastric torsion.

All their owners are saddened by the loss of such good companions, who were always a joy to be with and loving, but those memories hearten us in our lower moments encouraging a better frame of mind.

Mary and I have been enjoying showing Pechen as she is doing well and has been well appreciated in the championship shows. This has made the passing of DV less painful, but Pechen has lost her “chew toy”, that neck that was always available for Pechen to mouth. Instead we have taken up the games with kongs and bones and lots of other toys suitable for a sixteen month puppy.

We arrived at the NEC Birmingham in good time before judging, so we relaxed, Mary with a cup of tea while I wandered around saying “hello” to friends who made it early as well.

We got into the ring later with seventeen other junior bitches. Pechen and I stood between friends, Janet with Pechen’s sister Bronwen and Lisa with her girl. Pechen played with both of them while waiting for the others to be judged.

The judge looked at all the exhibits a second time and pulled out the three of us and two others for consideration for prizes. Pechen ended up with a second prize, Janet’s received a third and Lisa’s a reserve (fourth).

We had a great day out with Pechen and our friends with lots of lively conversation around the ring and well away from the ring in the “restaurant”.

Now at home, she went straight to sleep for the evening until she finally went to bed for the night.

Pictures will be forthcoming, once I have them, either “stealing” them from other sites or from friends who thought so well of her that they took a picture and sent them on to us.

Eight days ago, we took Pechen to Stoneleigh for the British Dalmatian Club’s Championship Show. Donna Whincup thought so highly of her that she awarded her Best Bitch Puppy.

Yesterday Pechen was at Stafford where she was entered in the North of England Dalmatian Club’s Championship Show. The breed specialist judge, Teresa Gardinor, awarded her Best Bitch Puppy. Then Bob Hernandez, the dog judge who is also a breed specialist, agreed with her that Pechen was the Best Puppy In Show.

Then the second show of the day began, the North of England Dalmatian Club’s Open Show. The judge was Sarah Hattrell, an all-rounder. She also thought she was the Best Puppy Bitch, but when she compared her to the Best Puppy Dog, she thought her better and she went home with the Best Puppy in Show.

We enjoyed the day with Kevin and Janet Saunders. She was a very proud “nana”. There were many compliments given to her and us about Pechen.

We would like to thank the judges for their high opinions of Pechen and all those who spoke so nicely about Pechen to us.

The judge enjoyed playing with Pechen, but she was one of many who were not placed.

At rest. For fifteen and a half years Zaffre was part of our household. She enjoyed life and made us enjoy life as well. In the show world, she will be remembered as the dam of Yaffle and Yves St Laurent (now a champion). There were three other dogs and a bitch from that litter who are in pet homes.

Over the weekend, Brenda Rance died. She was a good friend and guide in the world of dalmatians. Brenda and Peter bred Sorrel who gave us Cassia and Zaffre, and ultimately DV and Beren.

Brenda was a very generous friend, her door was always open and the table groaned with home-cooked food. Long conversations about dogs were always on the menu, dogs home and abroad, as she had lived for many years in The Netherlands and since returning to the UK she had judged regularly on the Continent. Hers was friendly face by the ringside at so many shows, watching the proceedings and gathering impressions of all the dogs on exhibition, while in the ring she concentrated on her dog and would help new-comers standing near her.

Many of her friends were like us, people who had Olbero stock as the basis of their kennels. The Olbero influence was wide-spread, here in this country, on the Continent and all the way to Australia.

We feel enriched by our friendship and will miss her company.

The winners of my private photography contest.

These are some of the better pictures I have taken. Here is one I had to reject.

Growing apace. She is now three and a half inches taller and six and a half kilos heavier.

Quite a while has passed since there was any news on the Tolutim site.

We could talk about the last year, with its lack of … [fill in the blank as you wish], but I will be silent on the subject (as the philosopher said – Wittgenstein, if you must know – “Of that which we cannot speak, we must be silent.” But there is news which we wish to share.

More pictures and news will come. But as we are exhausted at the moment with all the change and activity in the house, it will have to wait . . . .

While Mary and I have been walking the dogs in the snow, Stacey has been busy with her camera in the snow and captured two handsome photos of Frank. 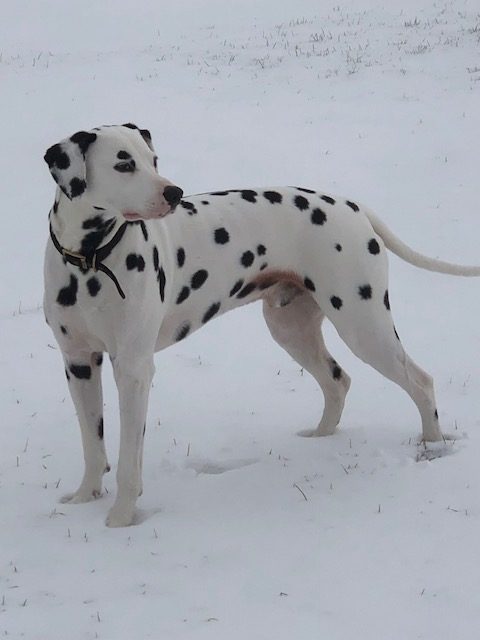 Alas, the snow is now melting, we will be cruising through mud next week. But with March here, it should become spring pretty quick, though there will be fewer flowers on the Japonica this year, as they were hit by the very cold winds and snow.